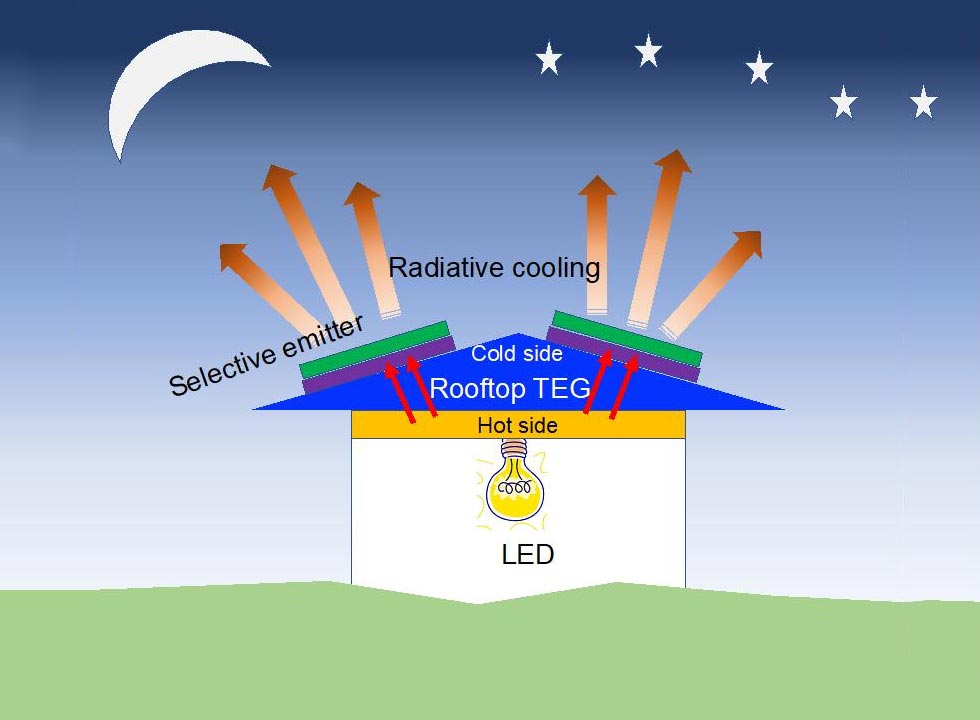 Researchers have designed an off-grid, low-cost modular energy source that can efficiently produce power at night. The system uses commercially available technology and could eventually help meet the need for nighttime lighting in urban areas or provide lighting in developing countries.

Although solar power brings many benefits, its use depends heavily on the distribution of sunlight, which can be limited in many locations and is completely unavailable at night. Systems that store energy produced during the day are typically expensive, thus driving up the cost of using solar power.

To find a less-expensive alternative, researchers led by Shanhui Fan from Stanford University looked to radiative cooling. This approach uses the temperature difference resulting from heat absorbed from the surrounding air and the radiant cooling effect of cold space to generate electricity.

In The Optical Society (OSA) journal Optics Express, the researchers theoretically demonstrate an optimized radiative cooling approach that can generate 2.2 Watts per square meter with a rooftop device that doesn’t require a battery or any external energy. This is about 120 times the amount of energy that has been experimentally demonstrated and enough to power modular sensors such as ones used in security or environmental applications.

“We are working to develop high-performance, sustainable lighting generation that can provide everyone – including those in developing and rural areas – access to reliable and sustainable low cost lighting energy sources,” said Lingling Fan, first author of the paper. “A modular energy source could also power off-grid sensors used in a variety of applications and be used to convert waste heat from automobiles into usable power.”

“One of the most important innovations was designing a selective emitter that is attached to the cool side of the device,” said Wei Li, a member of the research team. “This optimizes the radiative cooling process so that the power generator can more efficiently get rid of excessive heat.”

The researchers demonstrated the new approach by using computer modeling to simulate a system with realistic physical parameters. The models reproduced previous experimental results faithfully and revealed that the optimized system designed by the researchers could come close to what has been calculated as the maximum efficiency using thermoelectric conversion.

In addition to carrying out experiments, the researchers are also examining optimal designs for operating the system during the day, in addition to nighttime, which could expand the practical applications of the system.

This article is taken from the webpage SciTechDaily.